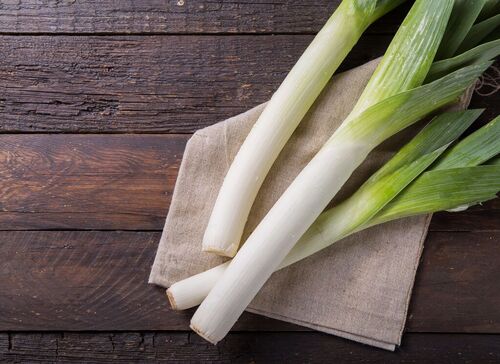 Leeks are large members of the Allium family related to garlic and onions, and are botanically classified as Allium ampeloprasum, and sometimes Allium porrum. They are biennial plants (requiring two growing seasons) but are typically grown and harvested as an annual. Leeks are known around the world as English Leeks, European Leeks, Kurrat Leek and Wild Leek. They were cultivated in Egypt more than 4,000 years ago, and enjoyed by the workers who built the pyramids!

How to start growing leeks

Leek can be grown from seed but did you know you can also grow a leek from a leek?! Simply place the white root end in a glass jar with a little water and leave it in a sunny or well lit spot inside. The green leafy part of the plant will start growing at a phenomenal rate. You can start sowing the leek seeds from the end of March to mid-May.

The earliest varieties can be sown under cover from late winter, with others following on from mid spring. Leeks are usually sown in pots or trays of potting soil and then transplanted into their final position when they’re big enough. Sowing is very easy. Start by sieving potting soil into pots or trays. Gently tamp the potting soil down then sow the seeds very thinly so they fall about an inch (2-3cm) apart. You can also sow two seeds per cell in a plug tray. Now cover them over with a thin layer of more potting soil, and water them. Keep the potting soil moist as the seeds germinate and the seedlings grow on.

Early sowings should be placed on a sunny indoor windowsill or into a greenhouse where the warmth will encourage quicker growth. As the seedlings grow you can if you wish separate them out and pot them on into individual pots. Before transplanting your young leeks make sure you’ve acclimatized them to outdoor conditions by leaving them outside for increasingly longer periods over the course of one to two weeks. They’re ready to transplant when they are six to eight inches (15-20cm) tall.

Begin by ‘dibbing’ (poking) holes that are about the same height as the leek seedlings' stems into well-dug soil. You can use a purpose-made dibber for this, or improvise with a cut-down handle from an old broken spade or fork, or even use the handle-end of a hand tool such as a trowel. Make one hole for each plant. The holes should be about six inches (15cm) apart, with a foot (30cm) left between rows, or if you’re planting in blocks space then seven inches (20cm) apart each way.

Now carefully remove the leeks from their pots and, if they haven’t already been potted on, tease the roots apart. Place the seedlings into the holes. It’s important that the roots reach right down to the bottom of the hole, so if necessary, help them along.

With your leeks in position, fill the holes to the brim with water and leave to drain. Do not fill in the holes. The soil will naturally fall back in with time, allowing the shanks (stems) to swell easily.

Leek prefers rich, well-drained soil. They need at least eight hours of bright sunlight. Many varieties require a long growing period of 120 to 150 days, but newer varieties take as little as 90 days to reach maturity.

Because the root system is shallow, one inch of rainfall per week is enough.

Mulching leeks, why and how?

The mulch will  prevent light from reaching the stalk, thus blanching it, giving you the white leek you want!Mulching cuts down on weeds and keeps the soil cooler and moister, much to the pleasure of leeks, which do best in cool, moist conditions. A variety of materials are used as mulch : Organic residues: grass clippings, leaves, hay, straw, kitchen scraps, comfrey, shredded bark, whole bark nuggets, sawdust, shells, woodchips, shredded newspaper, cardboard, wool, animal manure, etc.

A leek is ready for harvest when its white stem or shaft is 3 inches (7 cm) long or greater. Harvest leeks from loose soil by pulling them up. Pulling them out of heavy soil can injure the roots. Use a garden fork to reach under the roots and lift them from heavy clay soil. Shake the plants and brush off as much soil as possible and then rinse them thoroughly. Slice leeks in half lengthwise immediately before use and rinse out any remaining soil. Leeks are fairly frost tolerant, so you can delay harvest until after the first few frosts. They say leeks even taste better after a frost!

Go directly to the assortment of leek seeds >