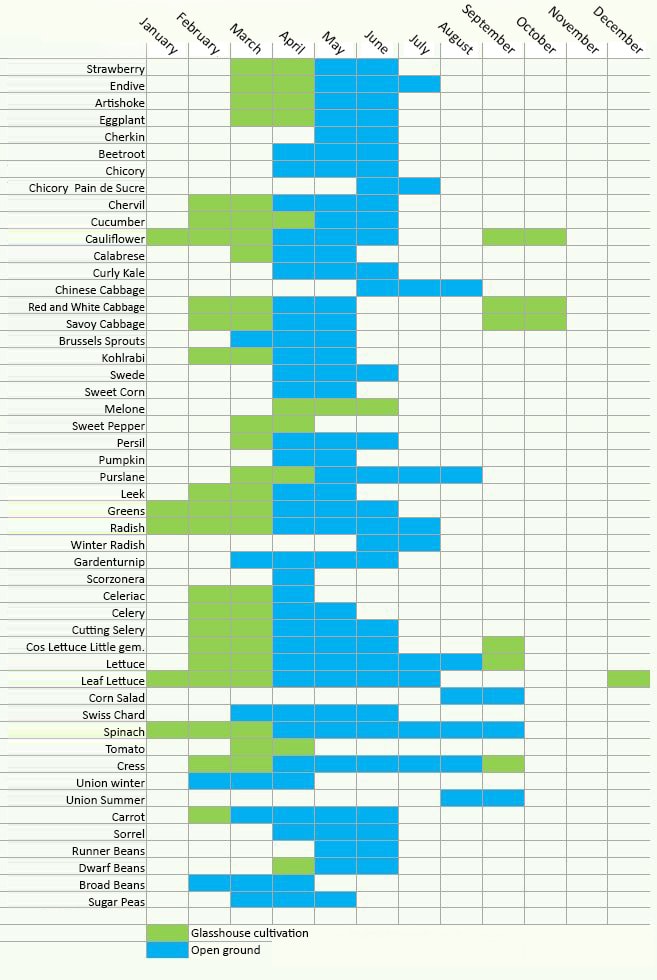 January
What can you sow in January? For example, you can start sowing cauliflower seeds, turnip greens, radishes (although they can be sown very early), various kind of lettuce seeds and Spinach seeds indoors or in a heated greenhouse. It's of course a bit dependent on the temperature so early in the year. Of course, microgreen seeds and sprouting vegetables can be sown and eaten all year round.

February
It's February, there are many more possibilities, but beware of course, it can be very cold at this time of year. But... If you can't wait and see... You can think of growing indoor cucumber plants, red and white cabbage, kohlrabi seeds, radishes seeds, celery, various types of lettuce seeds, spinach seeds, carrot seeds and broad beans. Germ vegetable seeds and microgreen seeds can be grown year round.

March
In March the sowing becomes even more fun, window sills can be filled with small greenhouses with many different kinds of seeds. Think of the types of seeds that are indicated in January and February, but now you can start pre-sowing strawberry seeds, endive seeds, eggplant seeds, calabrese seeds, Curly kale seeds, Brussels sprouts, peppers seeds, sweet pepper seeds, parsley, peas and pods. Germ vegetable seeds and microgreen seeds can be grown year round. Of course you can also start growing various types of herbal seeds.

April
In April you can sow almost all kinds of seeds. Of course it starts with buying seeds, you are certainly not too late in April, the whole sowing season is still ahead of us. To sow directly in the garden, it is a bit dependent on the temperatures. One year it is warm early, the next year it freezes in April. However, for many species it is generally the case that you can sow them directly in the garden. Of course, this does not apply to those species that would love the heat, such as tomatoes, cucumbers, melons, etc. You can sow them indoors, but not directly outdoors in the garden. Sprouts seeds and microgreen seeds can be grown year round.

May
In May can actually all species directly in the ground, but keep possibly ice saints as the guideline for no longer freezing in the night. It would be a pity if all the plants freeze and the work has been in vain. Also the pre-sown tomatoes, cucumbers, paprika, melons can be transferred to the greenhouse. There they can grow further in the warmth that spring offers them. Courgette's can also be sown, as well as lettuce, cauliflower and various other species. Sprouts seeds and microgreen seeds can be grown year round.

June
June is already the time to harvest for some vegetables, such as early sown endive, lettuce, radishes or spinach. Furthermore, it is certainly not too late to start germinating new species. Nowadays, the season lasts until the end of October, so there is plenty of time for everything to grow. Cauliflower, pointed cabbage, Chinese cabbage, minaret cauliflower and of course the pumpkins. Herbal seeds you can of course also sow. Sprouts seeds and microgreen seeds can be grown year round.

July
In July it is often nice and warm and more and more vegetables can be harvested. However, it is certainly not too late to sow several other vegetable seeds. Think of: rocket, lettuce, purslane, green loaf, cress, chard and Chinese cabbage. But also Beets, Radishes, carrots, chives and carrot parsley. In addition, there are plenty of beans to sow, such as butter beans, bacon beans, runner beans, green beans and string beans. Sprouts seeds and microgreen seeds can be grown year round.

August
In August it is certainly not too late to grow some more. Think of rocket seeds, spinach seeds, winter purslane seeds, ramenas seeds and for example watercress.

September
In September the days are getting shorter, although there is usually a lot of heat. In this month it is mostly harvesting, but you can still sow seeds. Think of lettuce seeds, spinach seeds, rocket and winter purslane. Sprouts seeds and microgreen seeds can be grown year round.

October
October is the month for many to prepare the garden for the winter. For those who still want something, winter spinach is something that will grow. In the greenhouse you can grow several other species, such as  lettuce, rocket, cress and winter purslane. Not to forget, microgreen seeds and sprout seeds can also be sown all year round.

November
Because the days are getting shorter, less light and cold nights, you can't sow in the garden anymore. If necessary, winter spinach, but then it will stop. You can look back on a wonderful vegetable garden season and of course already look at the new season, what you want to sow where or what you will do differently in the coming year. Germ vegetable seeds and microgreen seeds can be sown all year round.

December
In the month of December there is little to do in the vegetable garden. You can enjoy the holidays....