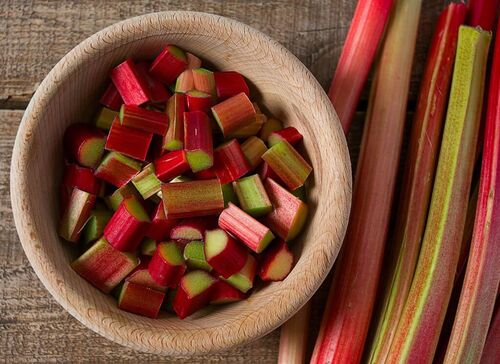 The scientific name for rhubarb is Rheum rhabarbarum. The rhubarb plant belongs to a group of plants of the genus Rheum in the plant family Polygonaceae. These plants are herbaceous perennial plants which grow from thick, short rhizomes. Their large, somewhat triangular-shaped leaves have long, fleshy petioles. Rhubarb is easy to grow, producing masses of delicious stalks every year. Only the rhubarb stalks are edible. Never eat rhubarb leaves as these are extremely poisonous, compost these instead.

Direct to the rhubarb seeds >

Start rhubarb seeds indoors in pots or seedling trays about 8-10 weeks before the last frost. You can start them in starter seed trays or small pots. You'll want to put them about 6 centimetres deep in a hole that you can make with you finger. Cover them over and water them. Keep the seedlings moist, but not saturated.  Rhubarb can die or be stunted from root rot in overly wet potting mix. Transplant the young plants out into the garden about two weeks before your average last frost, into an area amended with compost or well rotted manure and plenty of organic matter.

What should you plant with Rhubarb? Good companion plants for rhubarb are kale, turnips, cabbage, broccoli, beans, strawberries, onions, garlic and cauliflowers. You should not plant melons, pumpkins, dock, cucumbers and tomatoes with rhubarb since those plants can do more harm than good to your rhubarb.

How to grow rhubarb

Rhubarb grows best in full sun, but will tolerate partial shade. Choose a site with soil that is well-draining and fertile. Good drainage is essential, as rhubarb will rot if kept too wet. Mix compost, rotted manure, or anything high in organic matter into the soil. Rhubarb plants are heavy feeders and need this organic matter. Rhubarb gets big! It can grow to 2-3 feet tall and wide. Make sure you choose a site where it won’t be crowded. Space rhubarb plants about 4 feet apart and plant the roots 1 to 3 inches below the surface of the soil, with buds facing up.

Should rhubarb be picked the first year?

It's not recommended to harvest any stems in the first year no matter how proud and excited you are about your new addition. The plant will be weakened and needs a full first year of growth to establish a strong root system. Let the plant grow to go into the winter strong.

Leave that knife in the drawer. It’s all about the pull and twist! When stalks are sliced off with a knife, the part of the stalk left behind withers away. In contrast, twisting and pulling off the stalk allows it to separate from the bottom of the plant near the roots. This tells the plant to regrow a new stalk in its place, giving you a more fruitful harvest and a healthier rhubarb plant! Lean it to the side and in one motion gently twist and pull the stalk up. The stalk will pop and separate from the rhubarb plant at the root, and come cleanly away. Never harvest all the stalks off your rhubarb plant. Cut the leaves from the stalk and throw them in the compost bin. The leaves of the rhubarb plant are poisonous and should never be eaten. Rhubarb can be harvested from early spring until mid-July.

Rhubarb naturally tastes a bit bitter or sour. This sour taste is due to the oxalic acid in the rhubarb. The stalks are the only edible part of the rhubarb plant. These have a rich, tart flavor when cooked. The leaves of the rhubarb plant are toxic so be sure that they are not ingested.

The most famous variety is the Rhubarb Victoria. Victoria is one of the most popular rhubarb varieties in the world, mainly because it was the first variety ever to be used in cooking. We have these steeds in our range. There is also Rhubarb Lider or the Red champagne.

When the rhubarb plant is growing in its second year, you will be able to enjoy delicious fresh rhubarb from your own garden. After the 4th or 5th year, it is best to split the plant and use a healthy portion of the plant for the following year. Then you will keep healthy and strong rhubarb, year after year!

Good luck growing your own Rhubarb!