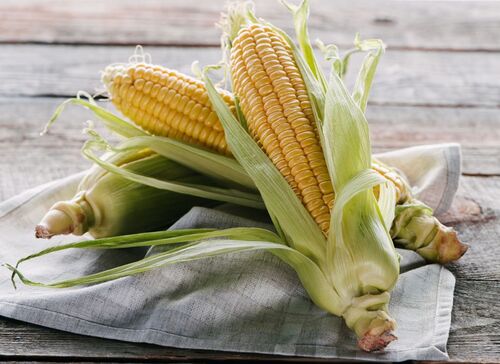 Scientists believe people living in central Mexico developed corn at least 7000 years ago. It was started from a wild grass called teosinte. Teosinte looked very different from our corn today. The kernels were small and were not placed close together like kernels on the husked ear of modern corn. Also known as maize Indians throughout North and South America, eventually depended upon this crop for much of their food.

Corn is a tender, warm-weather crop. Sweet corn is commonly grown in gardens.

Corn seeds are called kernels. There are different types of corn. We have 5 types in our range:

Go direct to the corn seeds >

Planting out your corn

Sweetcorn is wind-pollinated, so instead of planting them in a long row, set your plants out in a block for the highest chance of success. If the corn isn’t well pollinated, it will still grow but will be missing many of the kernels from the cob. Remove your young plants from their pots, then very carefully tease their roots apart. Try to retain as much of the soil around the roots as possible. Now plant your corn 18 inches (45cm) apart in both directions. Dig a hole for each plant, feed the roots to the bottom of the hole then firm the soil back in. Choose a spot in the garden that’s in full sun. Corn stalks are pretty tall, so they’ll cast some shade. Keep this in mind when putting them next to other plants.

Companion planting is a time-tested gardening method that enriches and protects vulnerable crops. Farmers and gardeners plant specific crops near each other in order to deter pests, attract beneficial insects, and stimulate growth.

If you’re going to grow corn, squash or beans in the garden anyway, you might as well grow all three. This trio of crops is referred to as the Three Sisters and is an age old planting technique utilized by Native Americans. The Three Sisters are made up of corn, winter squash and mature dry beans, not summer squash or green beans.

The ideal soil for growing corn is well-drained, preferably a sandy loam. Organic matter such as compost, leaves and grass clippings can be added to soil to improve its overall quality and improve drainage, particularly for heavy clay soil. Like most vegetables, corn grows best in soil with a pH between 5.8 and 6.8.

Corn plants are very heavy feeders when it comes to nitrogen. This macronutrient will make the stalks grow fast and green. You should apply nitrogen-heavy fertilizer to the soil at least twice a year. The first application should be added when the seedlings have 3-4 leaves or are about 6-12 inches tall. About 3 weeks later, add a second dose of fertilizer. Optionally, you can continue to fertilize as needed throughout the season.

Corn needs plenty of water, especially while the kernels are growing. Keep the soil consistently moist, which may mean watering more frequently in hot weather. If your plants aren’t getting enough water, the stalk will quickly wilt.

Corn is loaded with fiber, vitamin C, folate, thiamine, magnesium, and potassium, all of which are essential to human health. It is rich in all the minerals your body needs, including selenium which is often hard to find in other food sources.

The cobs are ready to pick when the tassels at the end turn dark brown. If you’re unsure whether a cob’s good to go, try the fingernail test. Peel back the top of the protective sheath then sink a fingernail firmly into a kernel. If it exudes a creamy liquid, it’s ready. If it’s not quite there the liquid will still be watery, and if there’s no liquid the cob is already past its best.

To harvest, twist the cob and pull it away. Aim to enjoy your harvested corncobs as soon as you can. Try it boiled or barbecued then served up with lashings of butter and pepper!

Go direct to the corn seeds >